Who owns land and dwellings?
The Cooperative – there is no individual ownership of land or housing.
For thousands of years Aboriginal people have looked after country without any notion of individual ownership, it took white man about 200 years to make a mess out of the place by carving it up into mine and yours. The notion of ownership is not just a fallacy (we cannot take it with us) but an inherent problem to sharing and looking after country. 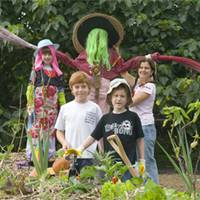 Why doesn't a share give me my own piece of land with a yearly levy to cover co-op cost etc.?
One of the main aims of Kanjini Co-Op is cooperative living, sustainably. We believe that private land ownership is a root cause of today's world problems. By moving from "this land is my land" to "we are one with the land", from private ownership to sharing, we develop a cooperative system of shared custodianship. We choose to not divide and apportion land because then we would have no say or input regarding who purchased that land if sold (or repossessed by the bank), therefore not knowing if the potential neighbours would adhere to Kanjini Co-Op principles of land care for instance or be aligned with the vision of Kanjini Co-Op. It also would make it much harder for the Co-Op to control for example pets which might cause problems, potentially harmful chemical use or determine the type of buildings allowed.

What would be the arrangement for people wanting to build their own houses, ie if there is no ownership, who pays for the buildings?
People do not build their own houses, the Co-Op builds all infrastructure. People may suggest certain designs and building methods for personal spaces and ask to be the manager of a building project, but it is the cooperative who decides and pays for the project.
We have created the possibility of self-interest investment shares for situations where members want personal facilities over and above the norm.
All land, housing and infrastructure will be owned by the cooperative,which means YOU as a member.

Why don't you allow private ownership of houses, while keeping communal ownership of the land as many communities do down south?
You are referring to the Multiple Occupancy communities in NSW.
Firstly there is no Multiple Occupancy title available in Queensland.
Secondly giving anyone ownership of a dwelling makes it near impossible to ever get rid of that person no matter how obnoxious they become.
Thirdly we observe that in most communities with private home ownership (and/or land ownership), slowly but surely people become less and less involved in community activities and more and more involved in 'their own thing' and what was once a thriving community turns slowly into effectively alternative suburbia.